What is Hysterectomy
Hysterectomy is an operation to remove the uterus (womb). It is an effective way of treating problems (diseases and other critical conditions) affecting the uterus. In most cases, hysterectomy is an elective procedure where the operation is done to improve the quality of life, that is, to relieve pain, heavy bleeding, other chronic conditions and discomfort.

Non-Descent Vaginal Hysterectomy
In this Surgery uterus is removed through the Birth Canal (Vagina).No incision is given on the abdomen. Upto 14-16 weeks size uterus can be removed by NDVH. We do sutureless vaginal hysterectomy with the vessel sealer instruments and ERBE VAIO 300 D advanced cautery system.

Hysterectomy may be performed to treat problems affecting the uterus. Some indications that suggest the need for hysterectomy are pelvic pain, chronic cervicitis, pelvic inflammatory disease, tumours, adenomyosis, large fibroids and large uterus. Endometriosis (a noncancerous condition in which cells from the uterine lining grow like islands outside of the uterus), Prolapse (vaginal supports begin to lose their muscle tone and sag downward), Dysfunctional Uterine Bleeding (DUB) which is unusually heavy or frequent bleeding . Some have symptoms that cause discomfort, while others can threaten your life. Other forms of treatment often are tried first. If they don’t work, hysterectomy may be considered.

Post Surgery Care
The length of stay in the hospital after non descent vaginal hysterectomy is shorter as compared with open hysterectomy. Normal activities can be resumed in about 1 week. 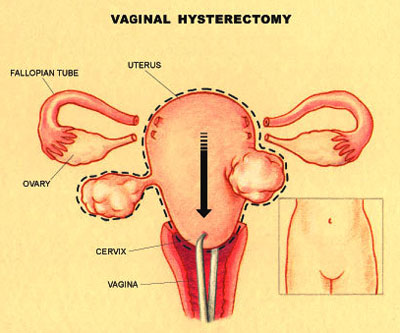