Erectile dysfunction (ED) is the inability of a man to achieve or maintain an erection sufficient for his or his partner’s sexual needs. Many men experience this at some point in their lives, usually by the age of 40.

An erection requires a precise sequence of events, which includes nerve impulses in the brain, spinal column, and area around the penis; and response in muscles, fibrous tissues, blood vessels in and near corpora cavernosa. E.D. can occur when this sequence is disrupted.

Damage to nerves, arteries, smooth muscles, and fibrous tissues as a result of disease is the most common cause of ED. Diseases such as diabetes, kidney disease, chronic alcoholism, multiple sclerosis, atherosclerosis, vascular disease, and neurologic disease account for about 70 % of ED cases. Between 35- 50 % of men with diabetes experience ED. Lifestyle that contribute to heart diseases and vascular problems also raise the risk of ED. Smoking, overweight and avoiding exercise are possible causes of ED.

Also, Pelric surgery (especially radical prostate and bladder surgery for cancer) can injure the nerves and blood vessels, causing ED. Injury to the penis, spinal cord, prostate, bladder, or pelvis can lead to ED by harming the nerves, smooth muscles, arteries, and fibrous tissues of the corpora cavernosa.

In addition, many common medicines likeblood pressure drugs, antihistaminics, antidepressants, tranquilizers, appetite suppressants, and cimetidine ( ulcer drug)can produce ED as a side effect. This account for about 25 % of ED cases. 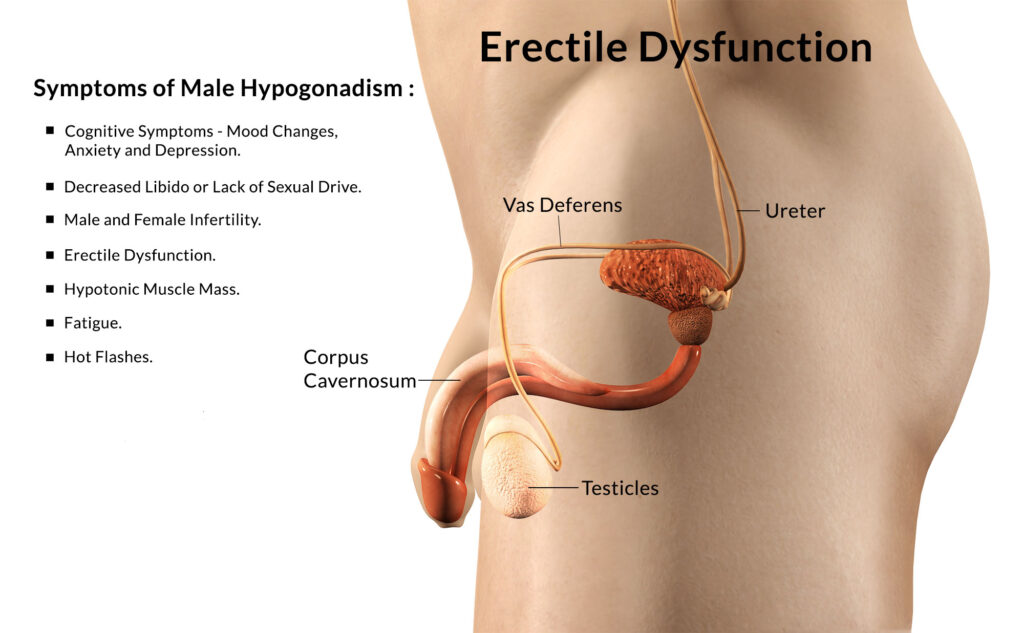 Psychological factors such as stress, anxiety, guilt, depression, low self-esteem, and fear of sexual failure cause 10-20 % of ED cases. Men with physical cause for ED frequently experience same sort of psychological reactions (stress, anxiety, guilt, depression). Other possible causes are smoking, which affects blood flow in blood vessels, and hormonal abnormalities, such as low testosterone.

Patient History
Medical and sexual history helps to define the degree and nature of ED. Medical history can disclose the diseases that lead to ED, while a simple recounting of sexual activity might distinguish among the problems with sexual desire, erection, ejaculation, or orgasm. Using certain prescription or illegal drugs can suggest a chemical cause.

Physical Examination
Physical examination can give clues towards systemic problems. For example, if the penis is not sensitive to touch, a problem in the nervous system may be the cause. Abnormal secondary sex characteristics such as hair pattern or breast enlargement can point to hormonal problems, which would mean that the endocrine system is involved. The examiner might discover circulatory problem by observing decreased pulse in wrist or ankle. Unusual characteristics of the penis itself could suggest the source of the problem- for example, penis that bends or curves when erect could be due to Peyronie’s disease.

Laboratory Tests
Several laboratory tests can help diagnose ED. Tests for systemic diseases include blood count, urinalysis, lipid profile, and measurements of creatinine and liver enzymes. Measuring the amount of free testosterone in the blood can yield information about problems with the endocrine system and is indicated especially in patients with decreased sexual desire.

Psychosocial Examination
Psychosocial examination comprising of an interview and a questionnaire reveals psychological factors. Patient’s sexual partner may also be interviewed to determine expectations and perceptions during sexual intercourse.

Psychotherapy
Experts often treat psychological ED using techniques that decrease anxiety associated with intercourse. Patient’s partner can help with the techniques, which include gradual development of intimacy and stimulation. Such techniques can also help to relieve anxiety when ED from physical cause is being treated.

Research on drugs for treating ED is expanding rapidly. Patients should ask their doctor about the latest advances.

Vaccum Devices
Mechanical vaccum devices cause erection by creating a partial vacuum, which draws blood into the penis, engorging and expanding it. These devices have 3 components: plastic cylinder to place the penis, pump to draw air out of the cylinder, and an elastic band placed around the base of the penis to maintain the erection after the cylinder is removed and during intercourse by preventing blood from flowing back into the body.

Surgery usually has 1 out of 3 goals:

Implanted devices (known as prostheses) can restore erection in many men with ED. Possible problems with implants include mechanical breakdown and infection, although mechanical problems have diminished in recent years because of technological advances. Malleable implants usually consist of paired rods, which are inserted surgically into the corpora cavernosa. The user adjusts the position of the penis manually and therefore, the rods. Adjustment does not affect the width or length of the penis.

Inflatable implants consist of paired cylinders, which are surgically inserted inside the penis and can be expanded using pressurized fluid. Tubes connect the cylinders to a fluid reservoir and a pump, which are also surgically implanted. The patient inflates the cylinders by pressing on the small pump, located under the skin in the scrotum. Inflatable implants can expand the length and width of the penis to some extent. They also leave the penis in a more natural state when not inflated.

Surgery to repair arteries can reduce ED caused by obstruction that blocks the blood flow. The best candidates for such surgery are young men with discrete blockage of an artery because of an injury to the crotch or fracture of the pelvis. The procedure is almost never successful in older men with widespread blockage.

Surgery of veins that allow blood to leave the penis usually involves an opposite procedure, intentional blockage. Blocking off the veins (ligation) can reduce the leakage of blood that diminishes the rigidity of the penis during erection. However, experts have raised questions about the long-term effectiveness of this procedure, and it is rarely done.